An impressive diversity of peatlands cover about 600,00 km² of Europe’s land area. Temperature, precipitation and oceanity influence the distribution of distinct peatland types. Frost is crucial for the development of northern polygon, palsa and aapa mires (cf. distribution map). In regions more southward, temperate-boreal ombrotrophic (rain-fed) bogs cover large areas and have high peat accumulation rates. Further to the south, regions are dominated by minerotrophic peatlands, since low precipitation limits the distribution of ombrotrophic bogs (minerotrophic = influenced by mineral groundwater). Minerotrophic peatlands contain high diversity, for example within the spring mires, percolation mires and coastal peatlands found in the North German lowlands. In southern Europe, the land share of peatlands decreases and most peatlands are in estuaries. The Kolkheti Lowlands in Georgia with its pristine rain-fed bogs are exceptional due to high precipitation and frost-free winters.

Europe has a long history of peatland utilization. Approximately 54 % of peatlands are still accumulating peat. These mires can be found especially in the northern regions. Most of the other peatland areas were degraded by land use and lack peat-forming vegetation. 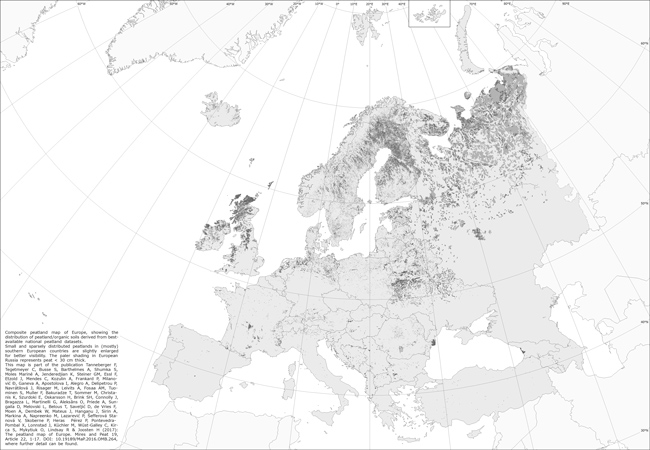 Distribution of peatlands and organic soils in Europe [1]